Kill Viruses in YOUR Home! 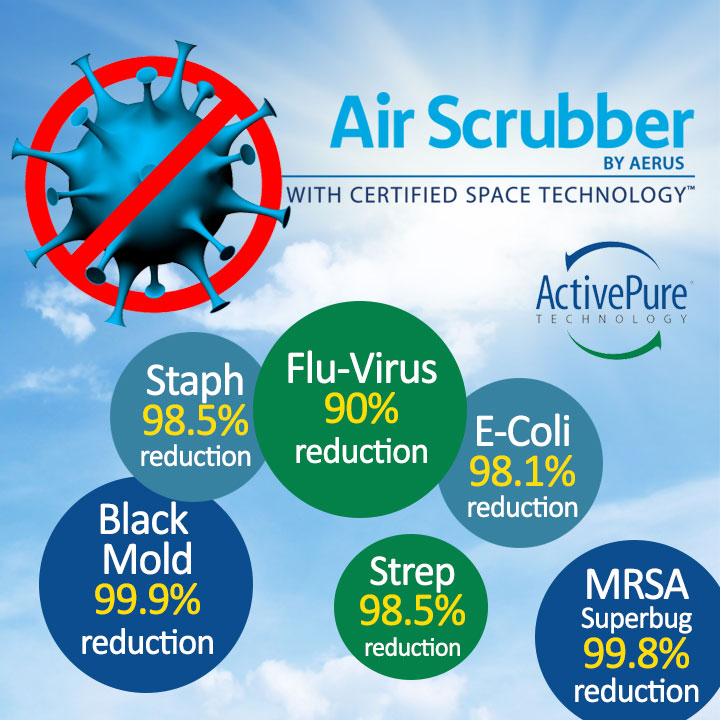 The Air Scrubber by Aerus® utilizes state-of-the-art technology developed by NASA to create a safe environment for the astronauts in the international space station.  This proprietary technology is called ActivePure®, and is the only air cleaning technology awarded the prestigious Certified Space Technology seal of approval by the Space Foundation which was created in cooperation with NASA.

ActivePure®  utilizes a proprietary photocatalyst system which creates powerful oxidizing molecules which are safe to humans and pets but which kill viruses and bacteria in the air and on surfaces.  Water and oxygen particles enter the ActivePure® honeycomb matrix.  While inside, the molecules are transformed into hydrogen peroxide (H2O2) vapor which permeates all exposed areas of your home.  These molecules destroy viruses, bacteria, fungi and mold not only in the air but on surfaces such as counter tops, light switches, cell phones, toys and door knobs, preventing cross contamination.

The Air Scrubber by Aerus® utilizes 3 different technologies: ActivePure® to kill viruses, plus ionization to prevent dust, and ozone (optional) to eliminate odors.

Ozone (optional) has the following benefits:

Have an Air Scrubber installed in your home today!  Polar Bear Heating & Air has two convenient locations serve you.